Testers running Windows 10's preview must keep the OS relatively up to date or face a bricked PC that won't boot.
The first three builds of Windows 10 Technical Preview -- 9841, 9860 and 9879, all released in 2014 -- will refuse to boot at the end of April, according to a message posted by a Microsoft support engineer on the company's discussion forum. 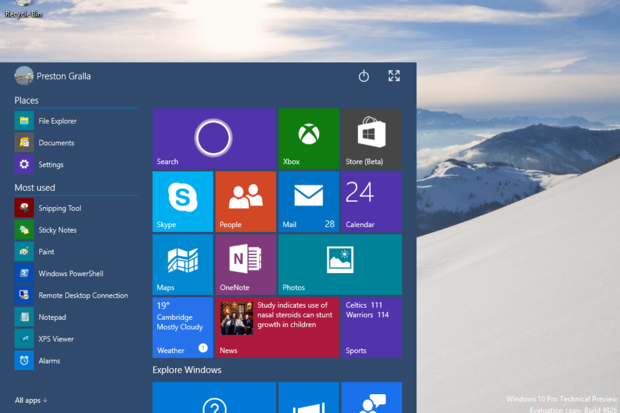 Personal computers running the three 2014 builds have been displaying warnings of the impending expiration for the last two weeks. Starting Wednesday, the PCs have been rebooting every three hours, another hint from Microsoft to update.

"Approximately 2 weeks after the license expires, the build will no longer boot at all," said a support engineer identified only as "RajithR" in a message dated April 10. That step is to start April 30.

The draconian measures have a purpose: They insure that testers and Microsoft do not waste time filing and reviewing bugs that have already been fixed. Apple didn't use such tactics when it publicly previewed OS X in 2014, but the Cupertino, Calif. company's beta had a much shorter lifespan than Microsoft's, which will have run almost a year by the time Windows 10 launches.
When Microsoft launched the Windows 10 preview last fall, it told potential testers that the first build would expire April 15, but pointed out that more would follow.
Which is exactly what it's done: So far this year, Microsoft has issued three additional builds -- 9926, 10041 and 10049 -- with the first appearing in January and the second and third in March. Build 10049, released on March 30, is the latest.
According to Microsoft's support engineer, 9926, 10041 and 10049 will stop booting on Oct. 15, with warnings set to begin popping up on screens Sept. 17 and the reboot-every-three-hours penalty starting Oct. 1. Future builds will probably carry those same dates.
Windows 10 will ship "this summer," Microsoft has said.
Because Microsoft will hand out Windows 10 free of charge to all consumer users and many smaller businesses running Windows 7 or Windows 8.1 -- the exception will be corporations running the Windows Enterprise edition -- there will be few barriers to testers who want to migrate to the finished OS.
RajithR said that it was likely there was a problem with Windows Update for those running builds 9841, 9860 and 9879 who have seen warnings and watched their PCs spontaneously reboot. He recommended that they download and install the disk image of the most recent preview. Those are in the .iso file format and available from Microsoft's site.
"If Windows has stopped booting due to an expired license ... you'll need to download the .iso file from another computer and then transfer the .iso file to installation media such as a USB flash drive or DVD. Then boot the PC from the installation media to install the latest build of Tech Preview," RajithR added, talking to people who won't be able to boot their Windows 10 PC on or after April 30 (emphasis added).
Installing a new version of Windows 10 with a disk image is akin to a "clean install," or one that wipes the existing OS and requires the user to reinstall applications and restore data from a backup.

If your reading this on your Windows 10 PC the above mentioned version.Go quick find a latest update before your miss the train.Post comments below.:)

Related : Keep Windows 10 preview up to date -- or face a dead PC