Previously, we published an article about how to increase your internet speed by unlocking reservable bandwidth, eliminate channel interference and by increasing the number of connections on your browser.

But here, we'll suppose that you’ve got a 4G hotspot, access to Wi-Fi, and a tethered LTE smartphone. With so much bandwidth available and you want to use all of your Internet connections all at once? 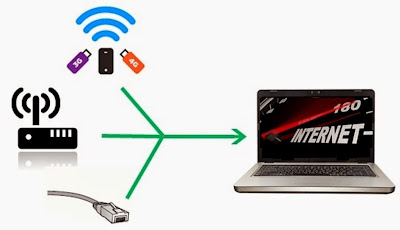 What if i told you that it's possible to combine multiple internet connections (make an aggregate) to create a one faster connection to boost your internet with maximum speed ?

Speedify is an app created last year (2014) from the makers of Connectify. It lets you use your Internet connections altogether! It can combine multiple WiFi, 3G, 4G, and wired connections for faster speeds and increased reliability.

In test lab, they combined DSL and 4G LTE connections with Speedify and used speedtest.net to see what kind of download efficiency we could expect with the two networks bonded together: results results show over 90% efficiency across-the-board !

- Sign up for Speedify here (1 GB free trial, starting from $9 monthly for 50 GB Data and $19 monthly for UNLIMITED Data)
- Download the client app on your Mac or PCs.
- Install the Speedify software and then simply enter the email and password that you received from Speedify to log into the Speedify server network.

- Log in by clicking the ''Speed Me Up'' button

- Connect all your modems or network connections, ensure that you have two or more WiFi, mobile broadband, or wired Internet connections active on your computer, and Speedify does the rest !
Yes! It's really as simple as that !

What may be good trick to do too??

As long as neighbors are in range of each other’s Wi-Fi networks, setting up Speedify to combine both connections to double their internet speed is a piece of cake !
After plugging into the primary home Internet as usual, the neighbors connect to each other’s Wi-Fi networks, too. With Speedify running, both Internet connections are instantly used for faster bandwidth and increased reliability!

The software comes, also, with some features:
Channel Bonding:
Speedify combines any Internet connections available to your Mac or PC to deliver speeds up to 50 Mbps for HD video streaming, faster uploads, and more. Bond DSL, cable, and mobile connections into a single blazing-fast connection. From web browsing to VPNs and video conferences, everything you do online is faster !

Packet Loss & Error Correction:
Some networks are prone to connectivity issues that lead to packets of data being lost or received out of order. For you, this means slow or unreliable Internet access. Speedify uses a variety of techniques like Forward Error Correction to fix lost and corrupted packets before they have a chance to slow down your Internet experience.

Failover Protection:
When you’re using multiple Internet connections with Speedify, you’ve also got seamless reliability. Say you’re trying to upload an important file, but the hotel WiFi signal is flaky. In most cases, your entire file transfer would hang or fail altogether. But, with Speedify that upload continues seamlessly on your 4G mobile hotspot until both networks become available again.

Location Control:
Speedify automatically connects you with the best server location based on latency and availability. Once connected, the Speed Server intelligently handles traffic to and from your various Internet connections to deliver faster speeds. However, you can also manually select your Speed Server to access region locked services and content.

Connection Priority:
Easily tell Speedify how and when each Internet connection should be used! With one click you can set Speedify to only use your 4G Phone, Mobile Hotspot, or other expensive or data-capped Internet connections when free options such as Wi-Fi or Ethernet are congested or unavailable.

Redundant Mode:
Have a jittery, lossy, or generally unreliable Internet connection? In Redundant Mode, Speedify attempts to send every packet over every available connection for increased reliability and minimal latency. This means that Speedify can double the throughput of even a single connection when packets are being dropped, and significantly reduce latency when using multiple connections.

Zero Configuration:
Just install the Speedify client software just like you would any other program, and the worldwide Speedify cloud servers do the rest: using the power of channel bonding to give you faster and more reliable Internet at the click-of-a-button.

Related : How to combine multiple connections (even with your neighbors) to increase internet speed